Many data users may suspect they’ve discovered duplicated records in the GBIF index. You download data from GBIF, analyze them and realize that some records have the same date, scientific name, catalogue number and location but come from two different publishers or have slightly different attributes.

There are many valid reasons why these duplicates appear on GBIF. Sometimes an observation was recorded in two different systems, sometimes several records correspond to herbaria duplicates (you can check the work of Nicky Nicolson on the topic), sometimes a specimen was digitized twice, sometimes a record has been enriched with genetic information and republished via a different platform…

This is why last year, we released an experimental data-clustering feature aiming to identify potentially related records on GBIF. The goal was not only to detect potential duplicates but to also find interesting relationships, such as between typification records or records originating from Natural History collections, DNA-derived sequences and citations of materials examined when publishing taxonomic treatments in journal articles.

Records that have been included in a cluster can be found with the “is in cluster” filter in the occurrence search. Each occurrence page belonging to a cluster will have a “CLUSTER” tab displaying the potentially related records (see a screenshot of this example below). 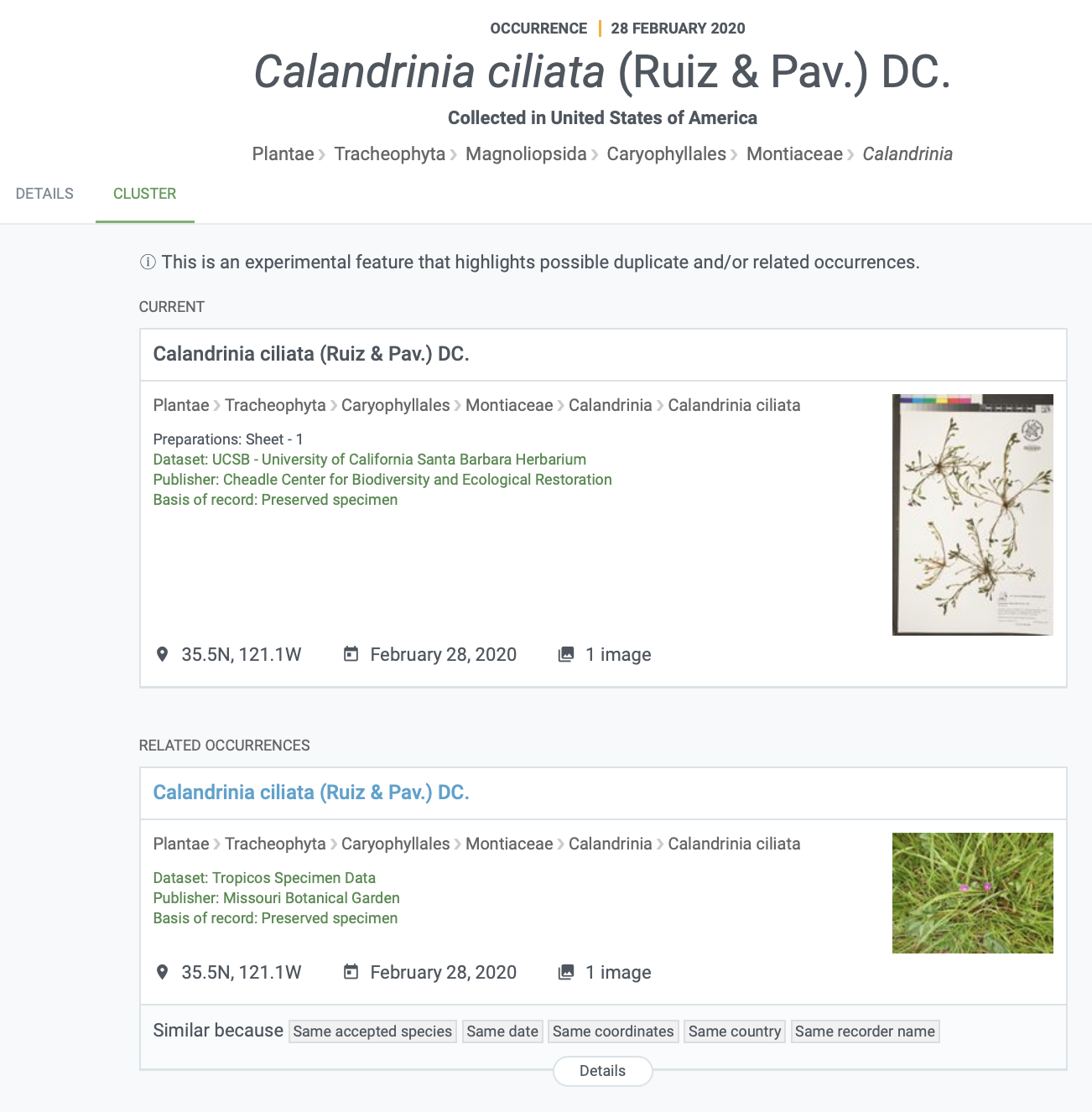 You can read this news item for more information and some exciting examples.

How does the GBIF data-clustering feature work?

Comparing nearly 2 billions records with each other is very resource intensive and quite impractical, so the first step of the data-clustering process is to select and group candidate records to compare.

The system first creates a series of “hashes” for each record based on specified fields. All records sharing a hash are candidates to compare against each other.

For example, one of the “hashes” used is based on the species key, rounded coordinates, year, month and day. This means that the records that share the same values for those fields will be grouped together in the candidate table for further inspection.

The fields used to identify and group the candidates are a subset of what is used later on for comparing them (see the table below). See this link to check the details.

Step 2: Compare candidates with each other and assess whether they are potentially related

Step 2: Compare candidates with each other and assess whether they are potentially related

In this second phase, the system will compare all records in the candidate set to each other and generate assertions. The assertions are inspected and the algorithms decides if there is enough evidence in the assertions to create a relationship between them. In the table below, I summarize how those assertions are made but if you would like more details, you can check the code available here.

The table below summarises the combinations of assertions that are sufficient to link the records in a cluster. If a group of occurrences share the combinations of assertions for any given column, they will be clustered together. [Edit 2022-03-11: The table below has been updated to reflect some changes in the clustering function: https://www.gbif.org/release-notes#11mar22] 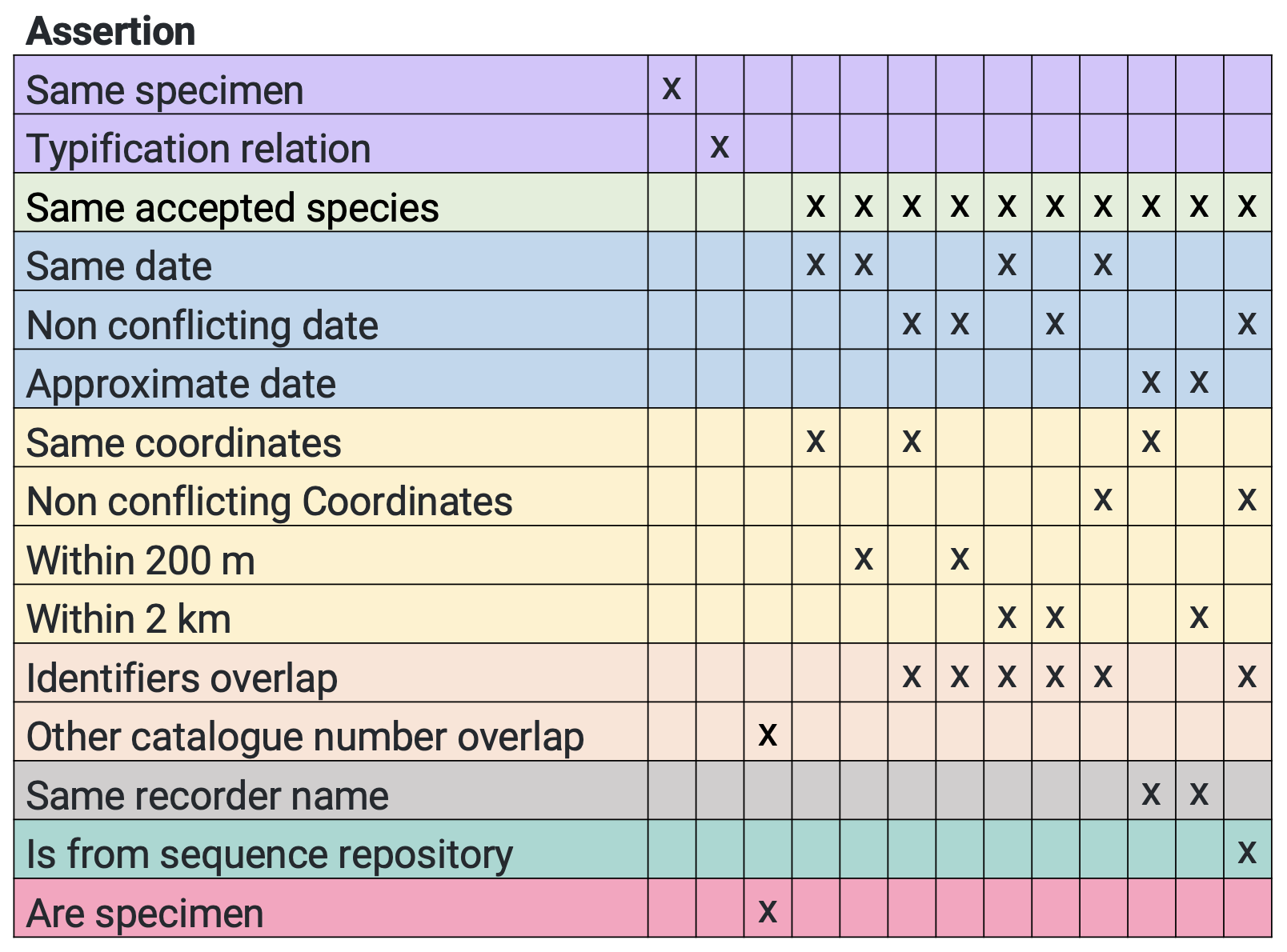 NB: Any group of occurrence associated with the assertion Different date or Different country will not be clustered together.

Why some occurrences are not clustered

It is possible that some occurrences check one of the combinations of assertions but aren’t shown as clustered yet. This could be the case for several reasons:

There could be other unforeseen reasons, and if in doubt, please contact us at helpdesk@gbif.org.

What can you do to improve linkage with other occurrences?

If for one reason or another, you need to publish on GBIF occurrences for observations or specimens that you know are already on GBIF, how best to do it?

Where to send suggestions and ask questions

If you have suggestions to improve the clustering feature or questions on how it works, you are very welcome to: