Gridded datasets are a known problem at GBIF. Many datasets have equally-spaced points in a regular pattern. These datasets are usually systematic national surveys or data taken from some atlas (“so-called rasterized collection designs”).

In this blog post I will describe how I found gridded dataset in GBIF.

What is the problem?

Users might assume that their underlying data is reflecting a highly precise measurement of a location, but coordinates collected on a low precision might be unsuitable for species distribution modelling or some other study. Right now a user making a download at GBIF has no way of knowing if the big blob occurrence points they downloaded contains a gridded dataset. This is a problem because users might assume more precision than what is present in the download.

After a little bit of trial and error, I arrived at a simple dataset feature (or measure):

Good things about this feature:

Bad things about this feature:

How to fix the bad things:

The spectrum from gridded to random 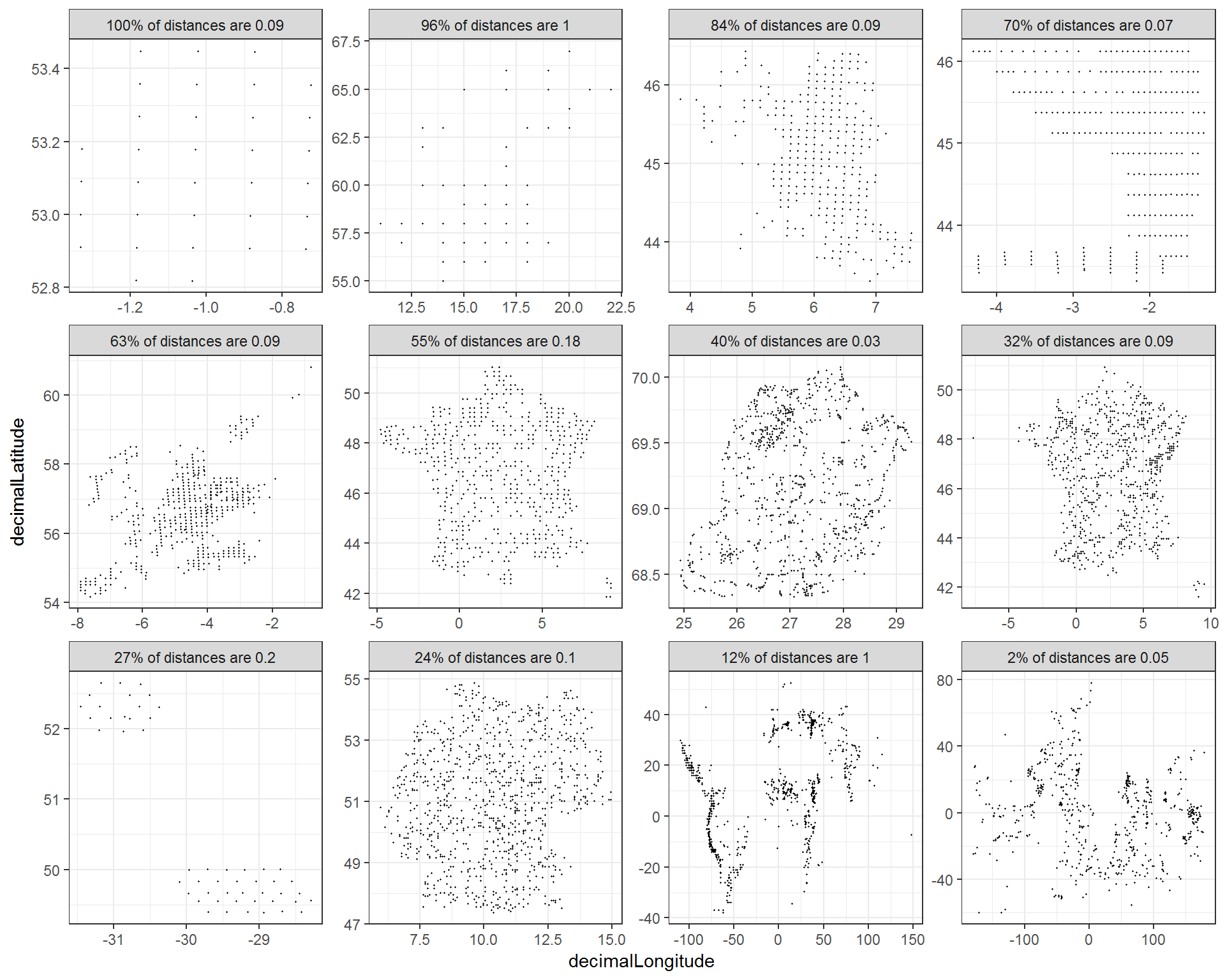 Most gridded datasets seem to be located in Europe

You can manually review all datasets that passed my filters

I have also plotted each of the datasets that have passed some basic filters here. Around 530 datasets are large enough and well sampled enough to review.

I want to filter gridded datasets from my download!

I have processed all occurrence datasets in GBIF and produced a griddyness score for each based off of nearest neighbor distances (described above).

Below is a basic example of how to filter a GBIF download in R with griddedDataSets.csv. The main variable to adjust is the percentNN or fraction of unique lat-long points with the most common distance. 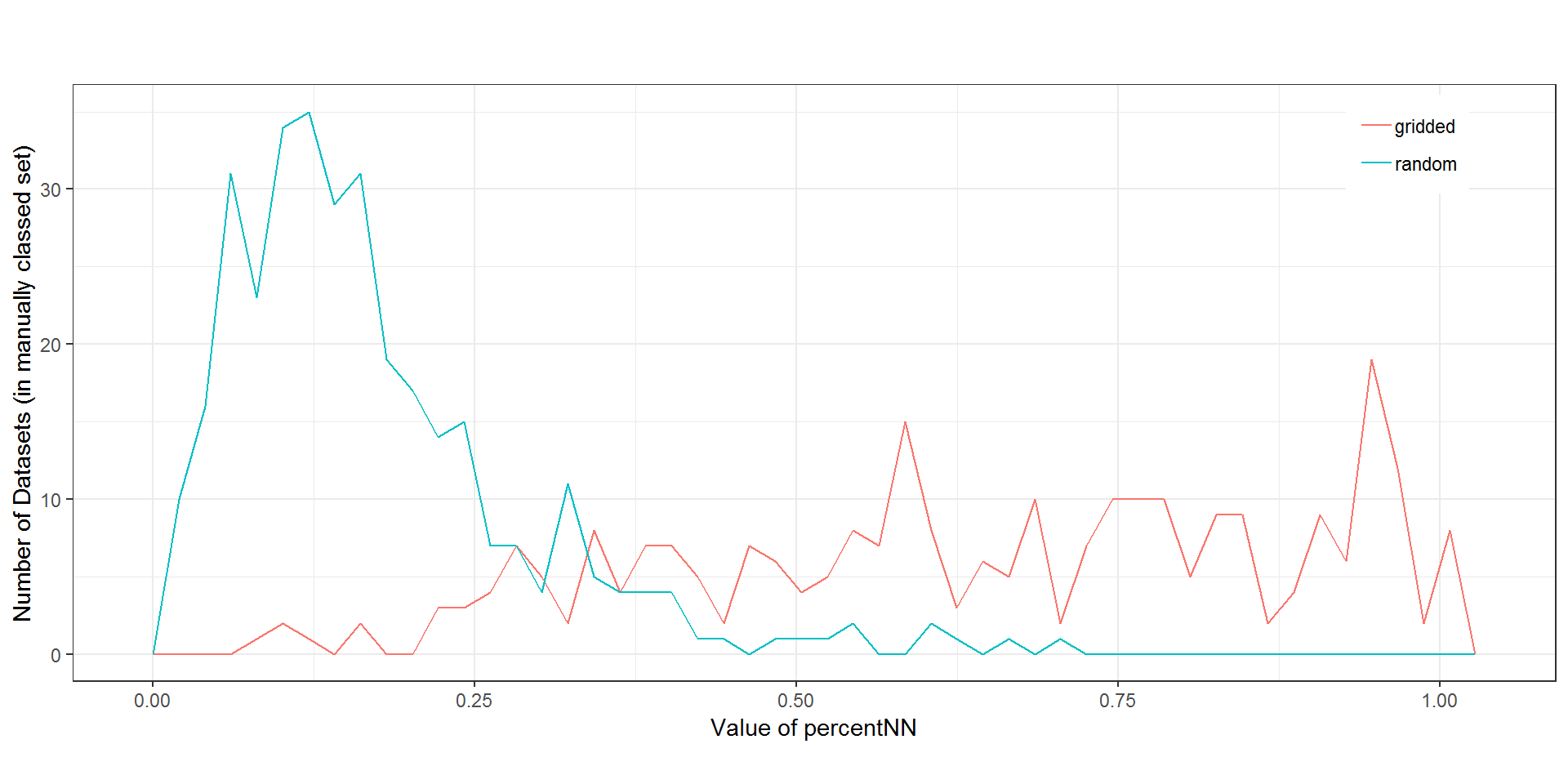 R-code to filter out gridded datasets

What if a dataset is not in griddedDatasets.csv?

Below we can also check if any datasets were not in griddedDataSets.csv.

In this case we see that there is one dataset in our download that is not in griddedDataSets.csv.

We can plot the dataset not in griddedDataSets.csv using the GBIF map api and see it is also most likely gridded. This illustrates that not all gridded datasets will necessarily be caught by my algorithm described above, but it should be able to remove the vast majority of gridded datasets. In the case of this dataset, it was not caught because it happens to be very large and have very few unique lat-lon points.

gridded dataset not in griddedDataSets.csv

In the future, I may consider downloading a larger sample from each GBIF dataset in order to catch such cases.

Coordiante Cleaner is an R package written by Alexander Zizka. This package utilizes the cd_round function to find gridded or rasterized datasets. It uses a different methodology than what is described here, but is definitely worth taking a look at.

Throughout this post I have implicitly been assuming all coordinates are projected using WGS84, but this might not be the case. For example, the UK uses something called Ordnance Survey National Grid, and there probably other projections that might have caused me to miss a gridded dataset.

Multiples of the most common distance

One could imagine looking for multiples of the most common distance as a way of detecting gridded datasets. This has the potential to improve performance, but it might also not help very much since we will likely be finding datasets that are already very ‘griddy’ and square.

Gridded datasets not sampled exactly at the same point

Sampling more than 1000 records from each dataset

One might want to compute griddy-ness scores for a new download. Or we might want to increase the sampling of the datasets to be more confident that we are catching all gridded datasets. This can be done in pricipal using rgbif. In general though this process will take longer and might be difficult to acheive if there are very many datasets.