Previously all occurrence licenses defaulted to their dataset license (provided by the publisher).

In 2014, following a community-wide consultation, the GBIF Governing Board established a general policy to “ensure that all species occurrence datasets within the network are associated with digital licenses equivalent to one of…three choices supplied by Creative Commons” (…) “As of August 2016, all open-access species occurrence datasets on GBIF.org carry standardized, machine-readable licences. These changes improve transparency and reproducibility and support GBIF’s mission to promote free and open access to biodiversity data.” – from Licensing Milestone For Data Access In GBIF

But this did not work well for datasets made up of records contributed by thousands of individuals like iNaturalist. discussion here 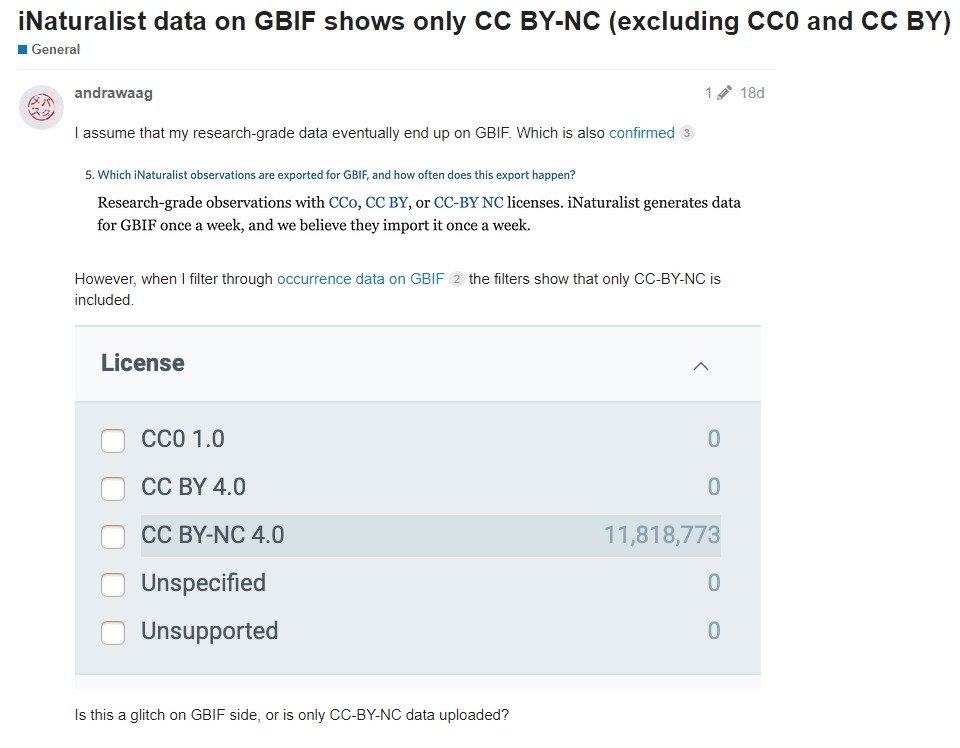 However, the vast majority of occurrences have no record-level license attached to them at all.

Based on the outcome of the consultation, and the agreement reached with data publishers, the decision was taken that to reach the goal of machine-readable license for all occurrence dataset, GBIF would in all cases use the license given by the data owner in their metadata, while the data owner / publisher would ensure that this accurately reflects the content of the dataset - choosing the most restrictive available license for datasets with mixed licensing, and excluding records from the published dataset that cannot be satisfied by the agreed licensing schemes.

As of the writing of this post, only 4 datasets have 2 or more occurrence licenses due to record-by-record parsing by GBIF.

The occurrence-level license field is a text field, meaning the values from records in +19K
occurrence datasets vary widely. Some variants we could interpret easily, whereas others cannot be. In most cases records will still get their dataset-level license applied to them. In situations where we cannot parse or interpret the character string into one of the 3 creative commons licenses mentioned above, we will default to the dataset license.

Currently, GBIF uses these officially supported licenses and dictionary to parse licenses. So if you are a data publisher and want you want your record-by-record occurrences licenses to parse correctly, you can use a supported string from the dictionary or preferably use one of the following character strings in the license field:

Less than 30 datasets have more than one license supplied to them, but only 4 datasets have 2 or more parsable licenses that GBIF accepts. The remaining datasets have one of the following scenarios:

in which case we have given the occurrences the license supplied by the publisher in the meta-data, which has to be one of the 3 supported creative commons licenses.

We are in the process of contacting publishers where their metadata dataset license disagree discernibly from the license on the individual occurrence records.

None of the above discussion will have any change to images, video, or audio licenses given to GBIF. These types of licenses have always been parsed individually. See this post for more information about GBIF multimedia licenses.